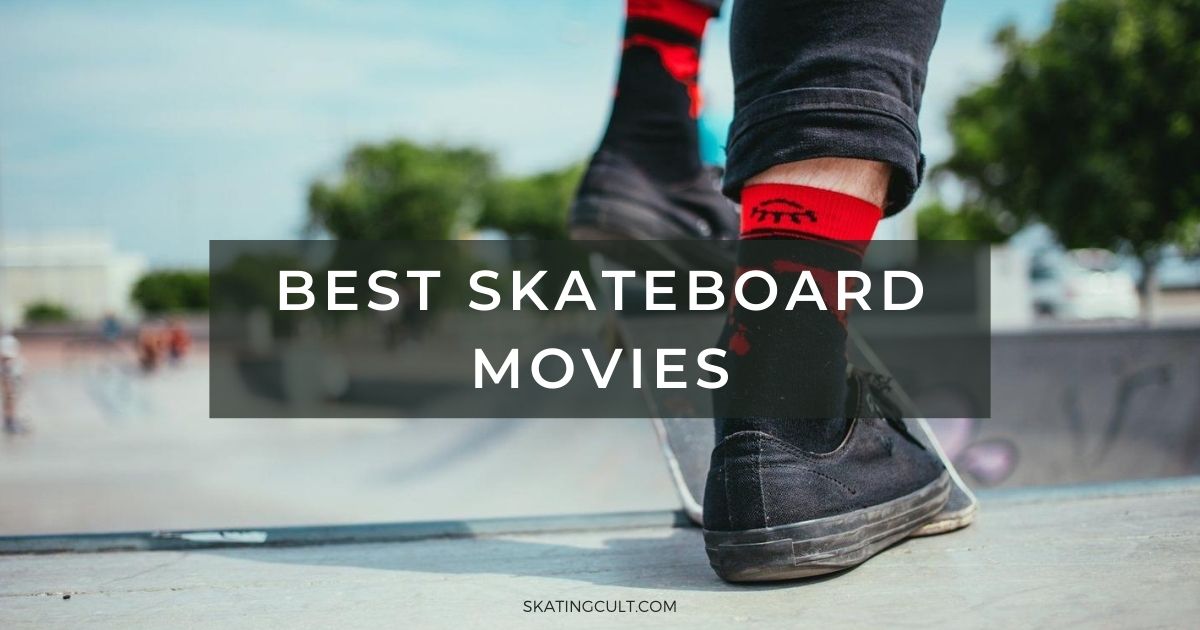 Over the years there have been dozens of skateboarding movies.

You can tell that most of the time skate movies are made by people that have no idea about skateboarding.

It makes them super hard to watch if you’re somebody who actually skates.

Now I’m not exactly a film critic, but I am a skateboarder with a lot of free time. So I decided to put together a list of the best skateboard movies to watch.

I spent a lot of time watching or rewatching movies to make this review. Just do me a favor. Leave a comment below or share this blog post if you find it valuable.

Lords of Dogtown is one of the most iconic skateboarding movies out there. Now it’s supposed to be based on a true story, but I wasn’t around back then.

So I don’t really know how much of it happened indeed. I’m sure the general outline is real, but they probably just exaggerated certain things just for the sake of the movie.

It takes place in Southern California in the 70s. Around that time skateboarding first became popular. The movie is based around the whole Zephyr team that included Stacy Peralta, Tony Alva, and Jay Adams.

The movie was also written by Stacy Peralta. And you can actually tell that the movie was made by someone who actually skates. It basically just follows skateboarding and how it came about.

Since the movie takes place just after polyurethane wheels got invented it really focuses on the whole era of skating pools and you’re almost guaranteed to want to go skate a backyard pool after watching it.

It’s definitely hard to show skateboarding accurately while still forming a plot that makes for a good movie. However, all in all, I think Lords of Dogtown did a pretty good job at it.

So if you haven’t already seen it, then I definitely recommend watching it.

All This Mayhem is a skateboarding documentary made by Vice back in 2014. I know it’s technically a documentary and not a movie but whatever.

Close enough it follows the Papas brothers who were two at the top vert skaters in the 90s. A lot of young skateboarders might not know about the Papas brothers. And I’m gonna be honest. I didn’t either until I saw this. I saw it when it first came out.

They were really good at the time. And they’re definitely up there with pros like Tony Hawk, Bob Burnquist, Danny Way. All the top dudes at the time. They were up there on the same level.

I would say that the documentary is kind of sad. And it shows what can happen when the skateboarding lifestyle has really taken to the extreme. I won’t give any spoilers. If you watch the documentary, you’ll definitely see what I’m talking about now.

When all this mayhem was first released, it got mixed opinions because it goes after Tony Hawk for being the first person to land the 900. I’m not gonna go into the details of it.

However, if you do watch it, just keep in mind that you’re only getting one side of the story. If you end up watching it and want to get the other side of the story, Trans did a full interview with Tony Hawk about it.

It’s also worth checking out even if you’re not into bird skating, in particular, I still think it’s a pretty interesting documentary to watch.

Even though Grind only got an eight percent on rotten tomatoes and I don’t think it was made by actual skateboarders at all, I still think it’s worth watching.

Grind is about a group of skaters trying to go pro by following around a skate demo tour on a summer road trip. Basically, like every other teen comedy out there, it’s kind of funny how cliche the movie is.

It’s almost like they set out to make the most stereotypical skateboarding movie they could. A lot of the skating clips don’t even make sense. And the same thing goes for the script. It’s also kind of what makes it so good in the first place.

You can tell that the actors in the movie don’t actually skate, but there are cameos by Fan Margera, a really young Ryan Sheckler, and also a few other pros.

Maybe I just liked it because it was one of the first skate movies that I watched growing up. However, I feel like Grind is a movie that every skateboarder should watch.

In the movie, the main character who’s played by P Rod is working on a street part, going on trips, and trying to win contests which is kind of how it is for a lot of skaters.

Most of the cast is made up of pro skaters in their awesome skateboard shoes. And they even go to a few famous spots and parks. In the movie, they hit the DC plaza in Ohio and they also hit the skatepark of Tampa.

It also has some of the best skateboarding performance which makes sense since the cast is made up almost entirely of pros. And unlike some of the other skate movies, they don’t only film skate Clips from the waist down.

So if people in the movie can actually skate, I will say that even though the plot of the movie is a bit more accurate than some of the other skateboarding movies.

It’s still a little cheesy. Again it’s hard to make a good skateboarding movie that’s accurate and still interesting to watch. So for what it is, I don’t think it’s too bad.

Street Dreams was produced by Rob Dyrdek so it makes sense that it’s a little more accurate than a lot of the other skateboard movies out there.

When it first came out it didn’t do that well because it was only in a few theaters. However, I really feel like if Netflix was more popular at the time, then it would have done way better.

Now I’m not saying that it’s a Hollywood blockbuster. On the other hand, as far as skate movies go, I thought it was pretty decent.

Mid 90’s is an Indy-style coming-of-age skateboarding movie that was written and directed by Jonah Hill. I didn’t even know that Jonah Hill skated.

According to Gingka magazine, he grew up skating. And the movie does seem like it was made by skateboarders.

Since Mid 90’s just came out a few years ago most skateboarders probably know about it. Almost all of the main actors are skateboarders. And there are even a few pros in the movie.

As you probably could have guessed by the name, Mid-90s takes place in 1990s Los Angeles. It follows the journey of a thirteen-year-old who finds out about skateboarding and starts hanging out at his local shop with a few older skaters.

Rather than just making it about someone trying to go pro, it shows what it’s like for someone who’s just starting out and how it is trying to make your way into a group.

The movie definitely seems like it was made by actual skateboarders. And personally I thought it was pretty good.

Most skateboarders have probably already seen Mid 90s because it’s so recent and it was so hyped up when it first came out. However, if you haven’t seen it yet, then I definitely think it’s worth your time and attention.

Unlike Mid 90’s, Skate Kitchen takes place in present-day New York City which as you know is on the opposite coast. Skate Kitchen is essentially a movie about a girl skater without any friends who gets welcomed into a group of girl skaters.

Of course, parents don’t approve of it and they want her to stop skating. However, she doesn’t want to stop. So they kick her out. And she moves in with her friends.

I’m not gonna go over the whole movie. If you’re into coming-of-age films, then you’ll probably like. It’s cool that Skate Kitchen is about a group of girls skateboarders because let’s be honest skateboarding is made up predominantly of guys.

So sometimes girls can be a little underrepresented especially when it comes to skateboarding movies.

Another cool thing about Skate Kitchen is that basically the entire cast skates. They aren’t even professional actors.

Depending on when he started skating the Bones Brigade might not seem like a big deal. It definitely played a major role in the way skateboarding developed.

The Bones Brigade was the first team that brought together the top guys from different parts of skateboarding. At the time, they were winning just about every contest.

And they were in almost every magazine with their best cruising longboards.

Also, the guys from their team were some of the biggest innovators in skateboarding. And they were the ones that invented a lot of the tricks that people do today.

I mean those guys alone invented like half of the tricks in skateboarding overall. Even though it’s technically a documentary and not a movie I still think it’s really cool to watch teachers.

This movie was one of the first major skateboarding movies out there. It came out in 1986.

And I’ve heard a lot of older skaters saying that this is the movie that got them into skateboarding. I don’t know how else to describe it other than saying that it’s very 1980s.

And apparently Johnny Depp was almost in it too which would have been pretty cool to see.

And they wear denim jackets with the sleeves cut off. It’s kind of hard to explain. However, it’s definitely worth watching the movie.

Now I’ve just watched Thrashin for the first time for the sake of this article. And even though it’s a pretty dramatized version of what boarding is like, I still thought it was pretty good.

Definitely check out some of these movies if you haven’t seen them already. Some of them are actually really good. And even the ones that aren’t that good are still pretty funny to watch.